This is a demonstration of NLTK part of speech taggers and NLTK chunkers using NLTK 2.0.4. These taggers can assign part-of-speech tags to each word in your text. They can also identify certain phrases/chunks and named entities.

How Part of Speech Tagging, Phrase Chunking, and NER Works

All the other taggers have been trained on part-of-speech tagged  NLTK corpora using train_tagger.py from nltk-trainer. These NLTK taggers cover the following languages:

The default chunker is a classifier based chunker trained on the ACE corpus. This means it recognizes noun phrases and named entities, such as locations, names, organizations, and more. It will only work well with an English tagger, and will work best with the default tagger.

All other chunkers have been trained on chunked or parsed NLTK corpora using train_chunker.py from nltk-trainer. These NLTK chunkers cover the following languages:

If you'd like to use this thru an API, please see the API docs for Tagging & Chunking and Phrase Extraction & Named Entity Recognition. And for higher limits and premium API access, signup for the Mashape Text-Processing API.

If you answered yes to any of these questions, please fill out this Natural Language Processing Services Survey. 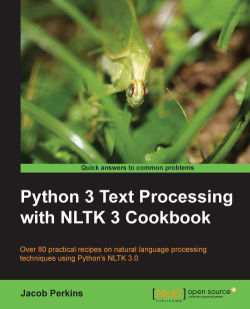